If you just got here, this is one of about a week-long series of blog posts about Singapore Math and number sense, and how Singapore Math techniques can help kids through The Wall, that barricade of "this makes no sense" that most kids run into somewhere between long division and elementary algebra. Much of this material will be appearing later in my forthcoming book, Singapore Math Figured Out for Parents. The book draws on two roots:
Another qualification of sorts: I've spent a fair bit of time teaching ADLs, Adult Disadvantaged Learners, people in their 20s-50s who are having to painfully pick up what they never got in school.  That has given me an all-too-clear picture of what the dead end of innumeracy really looks like, why it matters that just as many kids as possible get a decent start in math, and how hard it is to recover from a bad start later. I  really wish I'd known many of the Singapore Math tactics when I was teaching remedial college pre-algebra and beginning college algebra!
The series to date has included
•what number sense is and why it's important
•a questionnaire to evaluate your own number sense (if you're going to help your kid get it, it helps to have it or acquire it yourself)
•and three episodes before this one following a case study of the mathematical adventures of a beginning fourth-grader named Forrest. Despite being a composite of several different students with difficulties, Forrest made quite a bit of progress in those episodes, progressing through
1.  a general diagnosis of a memory problem and a conceptual difficulty with perceiving numbers as existing apart from what was being counted, to
2. a specific diagnosis that his conceptual problem was what was causing his memory problems, his very slow calculation,  and his inability to progress, leading finally to
3. the breakthrough moment when Forrest caught on to numbers as numbers, which ended with the warning note that breakthroughs are only beginnings, and that it's the practice afterwards that cements the breakthrough and makes it last.
And now, about that practice. If you don't read any other post in this series, this might be the one that gives the clearest idea of what Singapore Math is all about (at least, if I understand it correctly and I'm doing my job, two things of which you must be the judge).
§
Now that Forrest had a real idea of what numbers were, and how they connected to each other and to the world, he could see why his parents and teachers had been on his case to learn addition facts. He also had a much better understanding of what addition facts might have to do with the rest of math. All of that gave him much more motivation, but that didn't necessarily make the addition facts any easier to learn. If anything, it increased the urgency and made him impatient.
Forrest's mother confirmed he was continuing his practice at home with the addition table board, and was beginning to complain that he was bored and it had become too easy. That meant it was the perfect time to introduce a more complicated trick.
"Let's try you out on this one," I said. "Whenever you have one value, you have all the values around it." I put a tile down at 6+3=9 (that is at the intersection of the 6 row and the 3 column, I put down a 9 tile.) 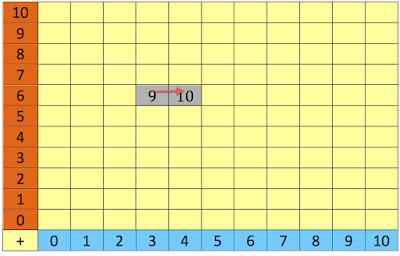 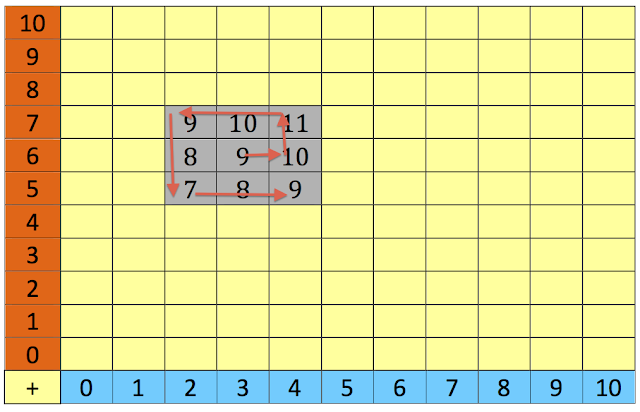 "You see? Now next we wrap around some more, so 5+5= ..."
"Ten."
"Right. Do you see where we go next?" I have to correct and steer him a few times, but soon he's doing the spiral pattern correctly, and gaining speed as he goes.  When it seems to be well-established, with another circuit and a half completed, I say, "So you see how it works. when you go up or to the right, the sum goes up by one. When you go down or to the left, the number goes down by one. And as you lay the tiles out in a spiral, you form that spiral pattern." 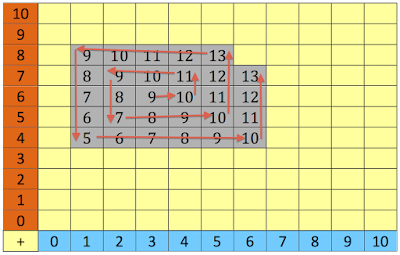 "What do I do when my spiral hits the edge of the board?"
"What do you think you should do?"
"Maybe skip down to the nearest blank space?"
"That might work."
"Or I could just start a new spiral on the board somewhere, and grow it till it runs into this one."
"That would work too. Why don't you try it a couple of different ways and tell me what you think?"
Long experience has taught me that boisterous kids like to make spirals run into each other, and then have some complicated rule for managing the collision. Quieter kids, especially ones who just want to get done, tend to try to figure out ways to get things back to running up and down rows and columns. After some debating, Forrest hesitantly made the boisterous choice, and started growing a new spiral around 8+8=16.
"Now there's something else you need to do. Every time you turn a corner, take a long breath, and look at the tiles you've laid down. Just imagine your mind is taking a picture of it. Try that now."
Pretty soon he had a rhythm going, and started building simultaneous spirals, taking turns adding to each one, so that they would collide. That small-child passion for patterns kicked in, embracing saying the addition facts as he did them. For a kid in remedial math, he seemed to be having a pretty good time.
Then a moment of panic: he stumbled at "eight plus nine". He tensed up all over.
"Deep breath," I said, "and look at what you already have.  You've got eight plus eight on one side of it, and seven plus nine below it, and you know what they are, so the square you want has to be -- " 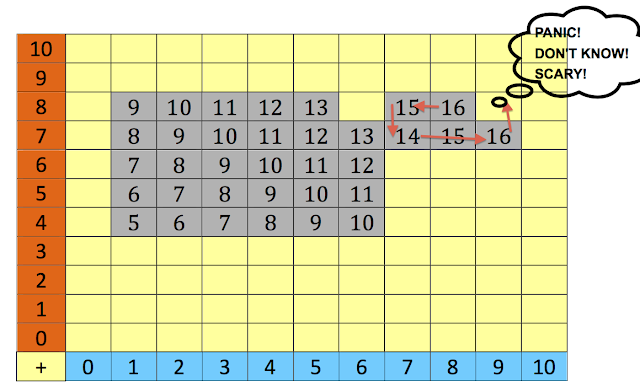 "Seventeen!" He was pretty excited; things were still making sense, after all.
"Say the whole thing, and point. Every tile you put down, say the whole problem. If you don't know the answer automatically, use the layout of the board to see what it has to be, but once you do see it, be sure you say it."
He looked a little stubborn, probably realizing how quickly he could lay out the table if he ignored all that addition stuff and just filled in the sequences.
I asked him, "So what are we doing this for?"
He shrugged. "It's not as boring as flash cards. It's not as hard."
"All excellent reasons, but here's another one. You're training your memory to find its way to the answer. There's four things that build memories, and if you can use all of them at the same time, they make very strong memories that last for a long time.  The first big memory builder is concentrating on what you're doing. Do you see that if you started just laying down the tiles in order, you wouldn't be thinking about the numbers anymore?"
"I guess not."
"You have to think about them and pay attention to them to build the memory. Pointing and saying makes you think about them a little more. It also makes you do the second thing that helps you learn: repeating a thing over and over. So ... get on with it, Forrest. You've probably almost got the whole table already, just from all the repeating and concentrating you've been doing in practice."
He finished a couple more spirals, and now the board held just a scattering of spaces to fill in.
"Now, this is where you can see the other two things that build memory. One is relationship." I pointed to the blank space at 9+6.  "What does that one have to be?"
"Fifteen?"
"Exactly! Now, how many ways did you know?"
He looks puzzled, which is normal at this stage, so I begin with examples. "You knew 10+6=16, you already had that on the board, right? So the 6 stays the same, the 10 goes down one, one down from 16 ... that would be one way to know. Or you knew 9+5=14, nine stays the same ..."
Slowly, he says, "six is one up from five so it's one up from 14, and that's 15."
"That's right. That's another way to know." I tapped my finger over the 8 spaces surrounding 9+6. "You see? Each of these is a clue. So they're all related. This number in the middle has to be the one that all these clues fit.
"That's using the third way, which is relationships, to remember. The more you relate, the better you remember. Going up, down, left, and right, it changes by 1. Going diagonal, it changes by two this way -- see, 13, then 14,15 -- and stays the same this other way. So if you get lost, not only do you have the rows and columns, you've got every square around every square."
I sent him home to practice spirals, and told his mother to let me know if he seemed to be getting bored or resistant.
§
Sure enough, by the next session, Forrest was good and bored, though he was pretty thrilled that in the special education math class he attended, he had showed a huge improvement with addition facts in a quiz that week.  "Well," I said, "there are lots of other things we can use the board for, and we will, but maybe you'd like to try something else?"
"Yeah!" By now, "something else" probably sounded wonderful. Attentive repetition is highly effective, but even when generously mixed with relation, it's still not much fun.
"Okay, let's see how fast you can set the board up. You can do it in any order and you don't have to say them. I'll time you."
He did it in less than five minutes, noticeably checking his math facts to make sure he was right. His quick confidence was very encouraging.
I drew his attention to the Left-Right-Down diagonals, the ones of identical numbers. Not only did each LR diagonal contain all the same number; the only place that number occurred was on that diagonal. "All the ways of making ten are on that one diagonal," I point out. "And the only place where you find any way of making ten is on that diagonal; the diagonal is the ways to make ten and the ways to make ten are the diagonal.* Why do you suppose that is?"
An advanced fourth-grader might figure out an answer, but a struggling student like Forrest first had to understand the question. (Again, no worry about that: figuring out a hard question begins with understanding it, and this was all valuable practice). His first answer was "Because it goes across like this," making a slashing motion in the air. He meant that it was a diagonal because it looked diagonal.
I said he was right, apologized for my unclearness, and asked him to try again, dropping more hints each time, until it clicked and he said, "Something makes that happen."
"Excellent! Now, here's what makes it happen."
I had him line up ten poker chips on the table and split them into two a group of four and a group of six, and made sure he knew that the number of chips stayed the same.**
"Now point to the first group and say how much it is -- "
"Four."
"And say 'plus,' and point to the second group -- "
"Four plus six equals ten."

"Exactly right. Just like you do when you're doing the board. Now move one chip from one group to the other, and do it again."