For those of you who just came in, you might want to drop back a day and read Part I,  which is not terribly long (at least not by my ultraverbose standards). It explained that this is a case study, and like most case studies, the characters in it and their difficulties are composites, examples of the common and the typical pulled from a number of real kids and real math situations that I've encountered since I began handling the math tutoring duties for Tutoring Colorado.
In our last episode, my invented composite tutee, Forrest, had gone through the NumPA interview, and by observing him I'd decided to focus in on two issues: memory problems, which I wasn't at all sure he had, and conceptual difficulties with thinking of numbers as abstractions, which I was fairly sure he had.  Both problems were probably interacting: he had a hard time memorizing because he thought of numbers as a set of temporary, arbitrary names, and he had a hard time moving beyond very rudimentary counting because he couldn't retain enough math facts to see any pattern in them.
So my basic strategy was to tackle the conceptual issue first while I gathered more information about the extent of the memory problems (if indeed there were any). And now on with the story ...
§
At the second meeting, I showed Forrest an addition-table board and tiles. The addition table board looks like this 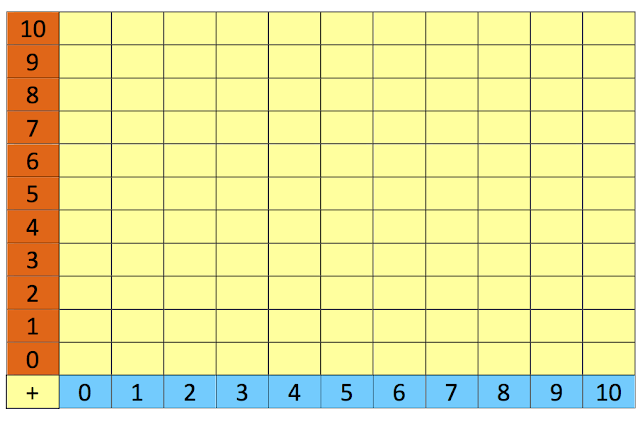 and the tiles, which are played on the blank spaces, are the sums, laid out like this: 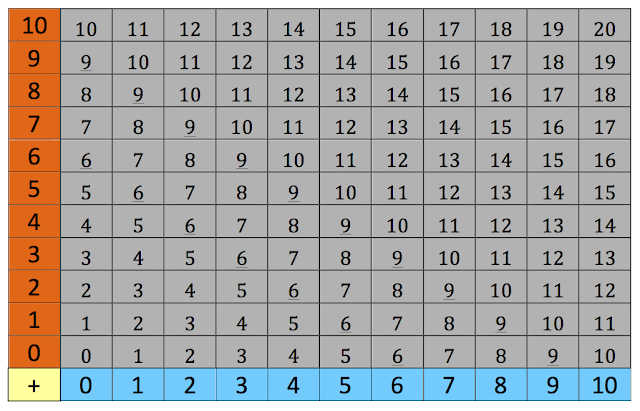 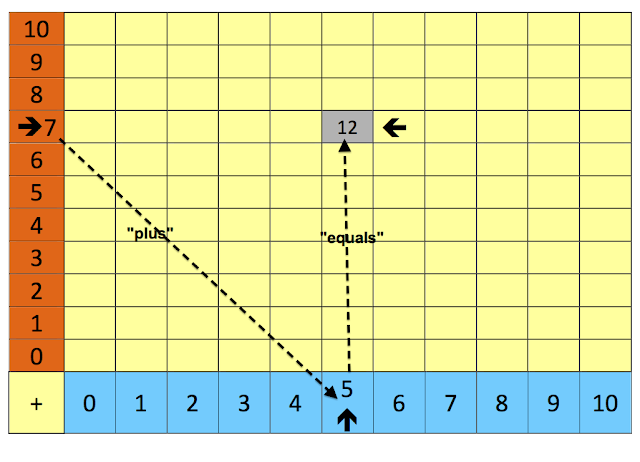 After a minute or so he got the hang of pointing to the row, then to the column, then to the tile. "One more time on this one," I said.
"5 plus 7 equals 12." He pointed at each number with full confidence; his index finger was the only finger he had up.
"What happens next is, I'm sending you home with a board and set of tiles, yours to keep. Try to keep them clean and organized because eventually you will be playing a lot of different games on them. Twice a day, for not more than twenty minutes at a time, what I want you to do is set up the addition table -- you don't have to finish each time, you can just get as far as you get, then start from that point at your next session. Every time you finish, just sort the tiles into groups over to the side, and start again from the beginning. It's not about getting it done, it's about doing the set-up right each time.
"Now, as you set it up, every single time you put down a tile, I want you to say the  addition fact out loud, pointing to the row and the column and the tile, just the way we just did.  It's very important to really look at every number at every step. Maybe say it two or three times extra if you catch your mind wandering."
We did a few more sevens and eights, rows and columns, together, and at the end he could say them in sequence. He was dubious about it; the addition facts just didn't feel as true to him when he didn't count. But he agreed to fill in as much of the board as he could in two 20-minute sessions every day, and to get the answers from the tiles, not from his fingers, speak each addition fact aloud, and try to concentrate on them as he did it. When his mother came to pick him up, we all went over the assignment together, to make sure she understood it and could remind and guide him.
"And he'll know his addition facts from this?" she asked.
"Probably.If not, I've got a lot more tricks.  And once he's had the practice, I can show him much more about how to use his memory more effectively. But the most important thing is that it gets him ready for the conceptual breakthrough we're trying for. Usually that doesn't take long, if he sticks to the practice.
"Remember, twice a day, but not more than twenty minutes, and it's okay to skip if he's not feeling well. But he's so good at it, he'll probably want to do it when you remind him." That's sort of a self-fulfilling lie; most of the kids I see are so discouraged that to have me tell their parents they are good at a math exercise, no matter how simple the exercise is, tends to make them want to do it; that experience of being good at it is something they enjoy so much and haven't had in so long.
§
And that's part two of this case study; part three, in which we see that conceptual breakthrough, tomorrow, I think. Always allowing for fate to jump me again, of course.
§
*Luckily, and I think to his surprise, they did always give the same answer.