Forrest Clearing (a tutoring case study, part III) . Also tyrannosaurs on Mars, and why I don't like Rumpelstiltskin


Latecomers and accidental wanderers-in: This is one of a whole series of blog posts about Singapore Math, number sense, and how Singapore Math techniques, when properly used, build and develop number sense and ultimately gets math-blocked kids moving again. The series began with some description of what number sense is and a questionnaireto see how your number sense is; since then, we've been following a case studyof the mathematical adventures of a beginning fourth-grader named Forrest. I made up Forrest from bits and pieces of half a dozen students whom I've tutored at Tutoring Colorado, where we use Singapore Math methods to unblock the frustrated and retrieve the lost. Eventually much of this material will be in my forthcoming book, Singapore Math Figured Out for Parents.
When we last left Forrest, I had finished the diagnostics and begun to assign him exercises.
Diagnostics had revealed that he had a pretty severe conceptual problem: he didn't understand numbers as abstract entities in their own right, but rather as temporary names for things, so that for him, counting "1, 2, 3 ..." was really not much different from naming "Grumpy, Happy, Sneezy ..."; the count was just the last name he arrived at, and there wasn't necessarily any reason to think that if he counted the same things twice, it would come out to "Dopey" both times.
As explained in the previous two pieces about him, this had also made it very difficult for him to learn elementary addition and multiplication facts, or to see any reason why the various algorithms/procedures were anything other than completely arbitrary.
He'd been given an addition table board and sent home to practice with it; his mother had been shown what he needed to do and had assured me he'd be doing it.
And now that you're up to date, we're ready for his next visit.
§
Forrest's mother had assured me that he'd been practicing regularly, with occasional minor nagging and reminding from her. He was also complaining that the addition table board was getting dull, and had mentioned that I had promised him that eventually we'd be playing some games on it. So far, for Forrest, math tutoring was occasionally different, but it still bore an uncomfortable resemblance to plain old math.
§
I had filled in about two thirds of the addition facts board, leaving few numbers adjoining, when Forrest came in: 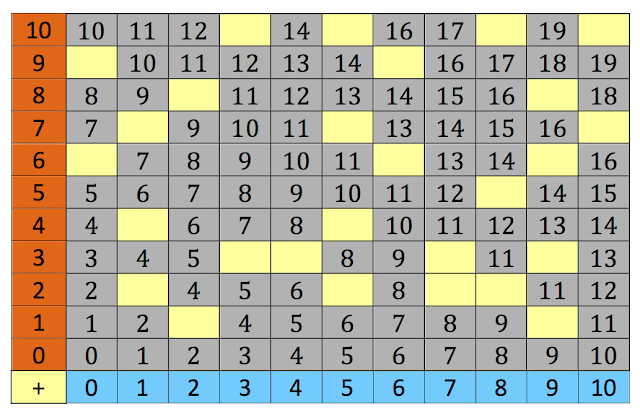 He found this mildly interesting. I added, "I'm holding the tiles over here in this rack -- it's the same one we'll use later when we're playing games -- so that you can't see them. What you have to do is point to a square and ask me for the tile that goes there -- by number, you can't just say 'May I have this tile.' Ready to try?"
He nods, points to an easy one, 3+4, and says, "I need a 7 for this one."
I give it to him. He quickly realizes that he can do this -- the location of most of the blanks at intersections of sequences makes it very easy -- and picks up speed and confidence. When he has most of them, has made no use of his fingers, and is going very quickly, I throw him a little bit of a curve.
He points to the 5+8 box and asks for a 13. I ask him, "So is it true that 5+8=13?"
He starts to count; I say, "Whoa. You did that problem already, several times, this past week, right? And you just pointed to it."
"But you just asked me again."
"I asked you if it was true."
"Well, I don't know if I counted right."
"It is true, Forrest. It will be true whether you count it or not, it was true before there was anyone to count, it will be true forever, even if we never put the tile on the board or we take it off and put a wrong number in its place."
"Okay." He sounds very doubtful and looks confused. Nonetheless, it's a healthy confusion.
I push him a little more. "If you have five Pokemon cards and I give you eight, how many do you have?"
He starts to look at his fingers. I hand him the tile he asked for, and he puts it down, almost unconsciously.
"Look at the board." I point to the five. "Say after me. 'I have five Pokemon cards, I get eight more, and now I have ...'"
He's been mumbling along, but now, firmly, he says, "Thirteen Pokemon cards."
"Because -- " I point back to the five.
"Five?"
"Five plus ... " I point again.
Suddenly he's pointing, as he's been practicing all week, but with much more enthusiasm. "Five plus eight equals thirteen!"
"Right. Now let's do it with dollars."
We do dollars in a bank account, books on a shelf, and at his suggestion, zombies in the graveyard, and at my suggestion, tyrannosaurs on Mars, even though there aren't any really.  Each time he finishes with "because five plus eight equals thirteen."
It's time to see if he sees the point. "So, five anything plus eight anything makes -- "
"Thirteen anything!"
"Always."
"Always!"
"So when you are doing a problem fifty years from now, and you're an old guy like me, no matter what you are adding, if it's five and eight -- "
"It's always thirteen."
"And way in the future, when you're counting up something that hasn't even been invented or discovered yet, if there are five of it in one bunch and eight in the other bunch -- "
"Thirteen." He looks a little astonished and even, still, a bit confused.
"What if there was a group of eight dinosaurs and a group of nine tyrannosaurs on Mars?"
His hands start to come up to count, but he stops himself before I can, and silently points for a moment before he says, "There would be seventeen tyrannosaurs on Mars."
"For sure?"
"For sure!" He's looking at the whole table now, as if it were a pirate's treasure map or the secret pathway to Oz or Middle Earth. I suppose in a way it is. I wouldn't be able to explain it to him, but he's just taken that step into abstraction, and found out that numbers are not arbitrary. He may not ever like it, but at least he knows a little more of what he's dealing with.
§
One thing I have always disliked about case studies in psychology texts and self-help books is what I call the "Rumpelstiltskin cure." If you remember that fairy tale,
Rumplestilstkin tells the former-millers-daughter-now-queen that he will cease tormenting her if she can learn his name.

Once she learns it, by dint of a well-paid spy, she asks him,
"Are you called Rumpelstiltskin !"
"A witch has told you! a witch has told you !" shrieked the little Man, and stamped his right foot so hard in the ground with rage

that he could not draw it out again. Then he took hold of his left leg with both his hands, and pulled away so hard that his right came off in the struggle, and he hopped away howling terribly. And from that day to this the Queen has heard no more of her troublesome visitor.

In half or more of the Hollywood movies about mental illness you've seen, that's the ending; the clever therapist (or the clever patient, or someone clever) figures out the one thing causing all the patient's problems (Rumpelstiltskin, abuse, some traumatic event), and as soon as it is named, the patient's problems vanish, leaving the patient all better.
Freud seems to have started the whole genre of "Rumpelstiltskin cures" with his paper about the Wolf Man, whose problems supposedly originated from having walked in on his parents at That Awkward Moment.
Even in the much less upsetting realm of math difficulty, Rumpelstiltskin is not how it works. Just naming the problem is handy, but it's not even close to the solution.
Conceptual breakthroughs are often very important, but they are the beginning, not the end, of the process. Forrest still had to learn all the math he hadn't learned before, and re-think all the math he thought he knew, and practice until the correct concepts became the center of how he knew that math. Going back, seeing the first wrong turn in the road, and correcting that turn, still leaves you with a lot of driving to do.
And driving, in this case, was a metaphor for "practice." The next and final part of the story is less dramatic (no mystery to it) but it's where Forrest did the real work of Singapore Math and finally caught up with his classmates.
The genius of Singapore Math is that it teaches the student to think about the right concept at every moment of practice; it's never just a procedure, it's a procedure and the idea behind it. Forrest had seen what the right idea was, after years of living with the wrong one.  But for the right ideas to fully displace the wrong, so that he was forever on the right track, he'd have to practice, practice, and practice, and it would have to be the right kind of practice, by which I mean the Singapore Math kind.
That's the real finish of the story, when the most important parts happen, and I'll tell you about that tomorrow.
Posted by John Barnes at 10:59 PM