More on that Singapore Math thing: So what was wrong with American math teaching in the first place?

If your school was really traditional-proceduralist you might have learned it as a simple visual pattern: 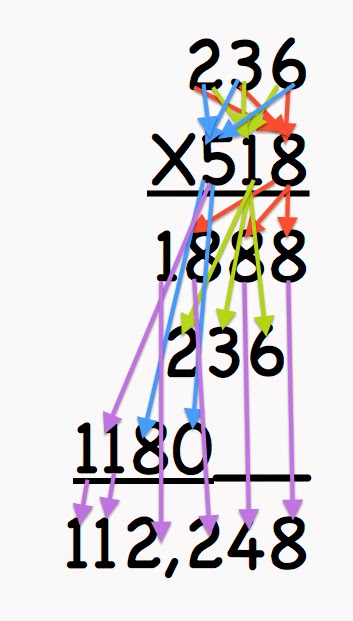 A minor unpleasantry that means delays rather than changes, a minor change for a pleasant reason, and minor news of forthcoming joyful unpleasantry

I've been only sporadically conscious for about a week as I have had one of those pleasures of advancing age, shingles.  I'm much better today, but keep falling asleep and having no concentration.  Tons of stuff to get going on and with luck I'll have the focus tomorrow to do it, but today I mostly hung out on social media and enjoyed being at perhaps 90% consciousness and coherence (relative to me, a not necessarily high standard).

Through one thing and another I discovered a pleasant side note: when the 2012 presidential campaign was winding down, I took down the page promoting Raise the Gipper! as I thought  political jokes would have the staying power of, oh, let's say zombies in a steambath.  I probably should have noticed, though, that trickles of sales continued through Amazon, B&N, and a couple other sites, totaling to 5-10 per month, ever after. Apparently rancid Ronald Reagan and ancient mockery of Republicans was a more popular topic than I might have thought.

Anyway, looking at some stats today revealed to me that my direct sales of Raise the Gipper! were still occurring, and had been all along, via the old free sample page (which was up and accessible but not linked here).  Apparently the link was still being found on old sites, and a few fans now and then were sharing it.

If this is the first you've ever heard of Raise the Gipper!, there's an explanation and about a chapter and a half sample at that page. In brief: in early 2012, far too late to have time to go through regular publishing channels, I had an idea for a short comic political novel, a genre that is now almost extinct but I loved in my misspent youth.  So I wrote one very fast (about 5 weeks to write, 1 to edit and format) and put it out there. Some folks gave it favorable reviews on Amazon, it sold some copies, the nation did not actually see Ronald Reagan rise from the dead, Newt Gingrich's brain eaten, or any involvement between evil space bats, Sarah Palin,a gigantic moose grinder, and the Second Coming. Once again the predictive power of science fiction writers was revealed to be a fraud.

But, for what it's worth, the old thing is over there to the right, freshly dug up and reeking of its age.  If it sounds like something you'd like, shamble on over.

Meanwhile, I'll continue recovering.  Vaccinate your kids, by the way. Shingles is the recurrence, decades laters, of chicken pox, as an infection of the ganglions around the spinal cord, spreading out along the nerves.  If there'd been vaccine for it before  1963, when I had it, my parents, being the responsible sorts they were, would've gotten it for me.  And then I would not have lost a week of my life, 52 years later, in mental fog and constant pain.

There's a relationship between that and "My Last Bringback," the story that Jonathan Strahan recently accepted for Meeting Infinity, (coming in November from Solaris) but I wrote the story before I had the shingles.  Just as well, or it would be an even angrier, more passionate story than it is already.  Just in time for Christmas .... the story of anger that burns forever!

And that, anyway, is a rambling account of what I've been up to.  More real soon, as other stuff gets taken care of.
Posted by John Barnes at 10:50 PM