Stuff that dropped off a full plate

For those of you who arise in the morning hoping that today there will be another 3000-word Rambler, well, not yet.  I'm in process of moving my office and I'm in the last weeks of rehearsing a play I'm in (first time on stage in 19 years.  Shocked to find out I've missed it so much).  So it'll be a while.

Meanwhile, though, I continue to write at several blogs in that other side of my life, marketing intelligence analysis.  Most of you are usually not interested, I have found, in subjects like the Kia Hamstas, Hiscox's quietly brilliant use of a mobile app in B2B insurance, the Zipf distribution of market share, or new statistics for estimating virality.  At least I think that's why you flee me at parties.  But as it happens, today's piece at All Analytics  has something to do with politics, in which some of you are interested, and specifically in structural graphs (pictures that show you how an election works rather than who's winning or predicting who will). So for those of you who just can't get enough of the election, get thee to the link, and you will see a nifty picture and some discussion of it.

For those of you who've already gotten too much, there's always the link to Raise the Gipper! at right.  See you all again, soon,  but probably not very soon.
Posted by John Barnes at 7:44 AM

A numeric approach to the seamy side of life: a very fast and esoteric follow-on for people who sew

Two people dropped me a note asking where I found out how thick a No. 5 sharp was, which they've been wanting to know, apparently, for years.   I had to look  that one up too, and searched for a while before finding the basic info at Prym's catalog website.  And then digging through half a dozen crafting websites.  The note from my crafty friends brought me to the blinding realization that this wasn't actually available anywhere easily in any place I could quickly find on line.

So as a little nod to everyone who likes to make stuff, here's what some research, checking needles from my sewing kit (so I got interested, so sue me) with calipers (because Prym and Simplicity both tend to round needle diameters to the nearest .10), and extrapolating led me to. This might be more useful for model-builders and miniature-makers than for seamst(ers)(resses) anyway, since at least it tells you what size hole a given needle will poke.

For the much too interested: Basically American needle sizes and European are arbitrary number sequences.

An American No. 1 needle is a millimeter thick.  Each successive number is .05 mm thinner.  Having found a couple of Simplicity hand-sewing needle converstion charts, it became immediately clear that the European system is simply the American number plus 19; the advantage of this for Europeans would seem to be that their shoe and sailmaking needles can all be on the same scale.


PLEASE NOTE: FOR HAND SEWING ONLY.  MACHINE NEEDLES ARE COMPLETELY DIFFERENT.
No warranty implied!  If you end up using the wrong needled to sew your zombie together and the first time he flips a guy off his hand flies backwards over his head, it's your problem (and his) not mine. 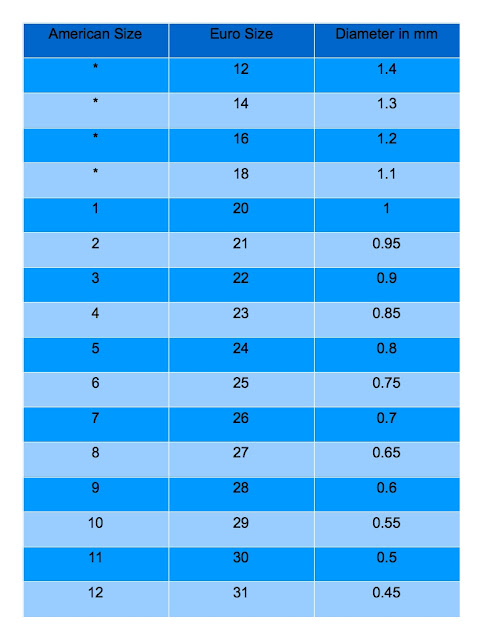 A short one for fun, with math

At the moment I'm drowning in half-finished blog posts as I keep having ideas and getting interrupted before I chew them to my satisfaction; one of the glories of Them There Interwebbical Things is that I don't have to chase after the biggest audience I can find, or any audience at all really, and just figure that the people who enjoy 3000-word Ramblers (tip of the hat to Mitch Wagner, who refers to many of my pieces as that) will find them here, and if that's not very many people, well, some of us are having fun and the rest of you will have to go find pictures of cute babies and cats and short punchy posts about whatever you like to be punched shortly about.

Anyway, having digressed, let me just point you to the following Tweet from Peter Aldhous:

The question, of course, is just how proportionate that is.

A No. 5 sharp hand sewing needle (what most of us keep around for sewing on buttons and closing up small tears) is 0.8 mm thick. The eye of  a sharp is usually about 4/5 of its width, so that would be around 0.64 mm.   An average height middle-class American woman* is 1.648 m tall, and women's eye-to-fingertip length averages 46% of height, so proportionately, if we assume for some horrible reason that this poor crazy woman is threading the needle by raising the thread to her eye and then trying to hit the eye of the needle at arm's length, that thread tip is traveling 1184.5 times the width of the aperture that the sewing woman is so awkwardly trying to hit.**

You could look on that as NASA trying to hit a needle's eye, not at arm's-length, but at 69,830 arm's-lengths (which comes to about 53 kilometers, if the woman's arm length is the 758 mm I was using before).  Add to that that they're hitting it by throwing (rather than hand-guiding) about a quarter-circle of a curve.  Or you could look on it as the woman trying to thread a needle eye  (at arm's length, remember) that is  only about 9 nanometers wide (about the width of 25 calcium atoms laid out in a straight line).

That's some sewing there, NASA. Maybe your department of metaphors should look for a metaphor that's about six orders of magnitude more incredible, because that's what you're doing.

*why a woman? why not?
why middle class? because that's the point where early nutrition plays a minimal part.
why American? Because although my country doesn't take particularly good care of its citizens, it keeps excellent, easily accessible records of the consequences of not taking care of them.

*** Area=3X12=36=pi(r squared).  r=sqrt(Area/pi)=about 3.39 (staying at two digit precision).  diameter= about 6.77 (same precision)=aperture.  Why use the area?  Because that's what matters when you're trying to hit a target at a distance.  Why circularize?  Because that was what I was doing with the eye of the needle; d/a, distance over aperture, was the proportion of  the distance traveled by the thread tip to the diameter of the needle's eye.  If you want another number figured another way, cook it yourself (and I hope you do).