How's Your Number Sense? Not quite a quiz

Yesterday I talked about number sense in quite a bit of detail, and sure enough, several of my Twitter buddies began talking about it with me. Even more naturally, they all wondered how good their number sense was and where they stood compared to everyone else.
This is not a surprise. Every living thing that has eyes seems to love a mirror.
I've never met readers or students who learn a new idea without wondering if it applies to them. This is why so many medical students suffer from hypochondria, law students become fascinated with petty grievances to themselves and their families, and I'm told by a friend who went through a full set of factory training as an auto mechanic that it was at least a year before he could drive without hearing every little stray sound from the engine. And whenever I've found myself explaining number sense to the parents of my tutees at Tutoring Colorado, sooner or later the parents have wondered about their own number sense.
So I am guessing that you might be wondering how good your own number sense is. My quick answer is, "probably pretty decent, since you're reading this, and most people with really bad number sense won't read about math at all." Then again, some people will endure almost anything, even fractions, if they think it will benefit their kids.  Possibly you are even wondering if the whole problem is that your own number sense is deficient, so you never really learned real math, and now you can't help your kids. It's a bit like asking, before you start reaching for the victims and pulling on their arms, whether you yourself are standing on quicksand, and it's a very good question.
In that case, please take some comfort in this: helping your kids with Singapore Math will boost your own number sense tremendously. I often send my tutees home with Singapore Math-based projects to work on with their parents, and I've lost count of the number of times I've heard, "So while I was trying to help him I suddenly got it myself. I never got that before!", and sometimes the even more enjoyable, "She did fine. She got it before I did, and she was so proud of herself for being able to explain it to me." As you come to understand what should be happening in/with/for their number sense, you're going to rapidly improve or reawaken your own. You may also become a great role model for how to handle intellectual difficulty, and help the kid see that though knowing matters, learning matters more.
So don't worry about how much number sense you have now. It's not a quiz. It's not a competition. There is no generally accepted scale for measuring raw number sense anyway; a good score might only mean you are a fast snail or a big mouse, a bad score might mean you're a slightly less beautiful eagle or a smallish whale. Most likely of all, it might mean I'm a poor questionnaire writer.
Nonetheless, let's see if this gives you a picture of where you are, and maybe some idea of where you want yourself or your kids to be.
This questionnaire is based on material I've used with older kids in the tutoring business. It aims to show how much you already use (or don't use) number sense in your approach to math, and I hope therefore clarifies what this number sense thing is all about. Please accept one hug, pat on the back, or small medal for voluntarily taking a math test in the hopes of helping your child. If that's not parental love, I don't know what else could be.
DIRECTIONS
It will help to have some way of recording the results as you go along, so you might want to open a note window or grab pencil and scratch paper. There's a full explanation of the answers at the end, but I strongly suggest you do all the questions before reading through the answers. On the other hand, even if you get them all right, you will still want to look at the explanations to see if you were actually using number sense to get the answers.
Read each question carefully. Figuring before thinking is probably the leading warning sign of poor number sense.
Do not time yourself, or do anything else to give yourself an incentive to be fast with an answer rather than clear about why it is right.
For each problem, record two pieces of information: You might want to draw up a little table with 2 columns, "answer" and "NS level", and 20 numbered rows, if you're one of those people who likes to keep neat records. "Answer" needs to be the widest column. Here's one to copy to paste to your note window if you like: 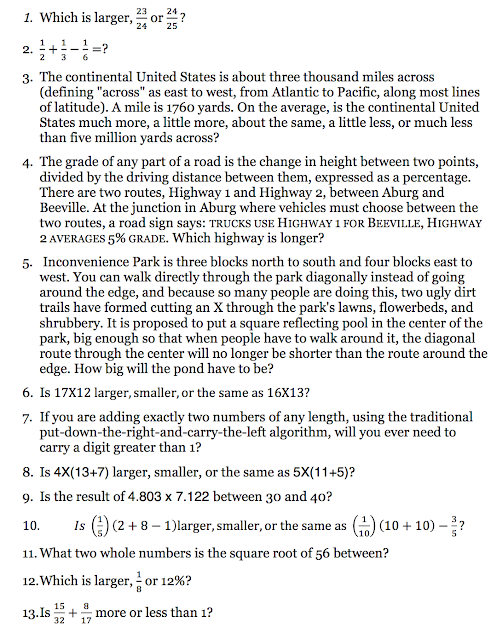 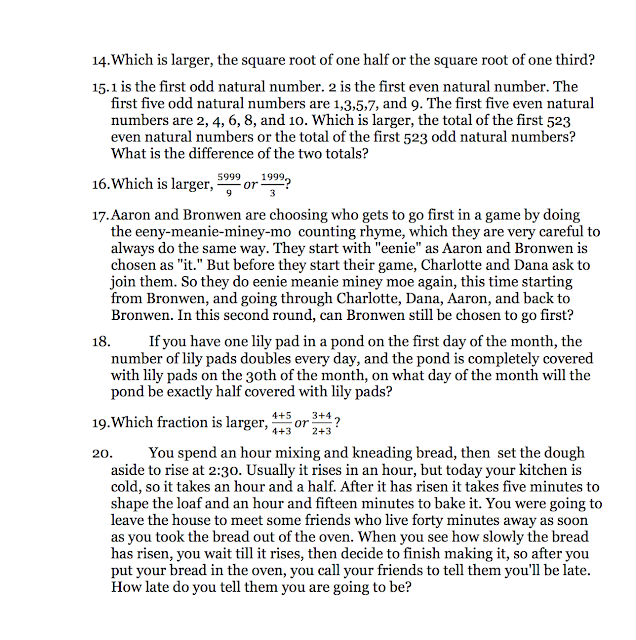 §
The answers, and how people with number sense might know them without calculating. 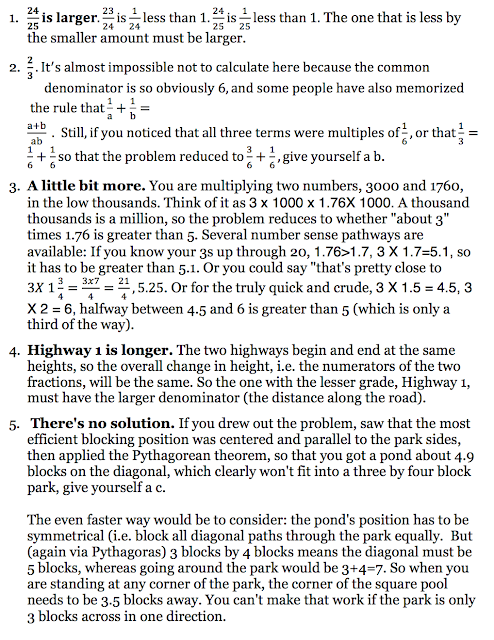 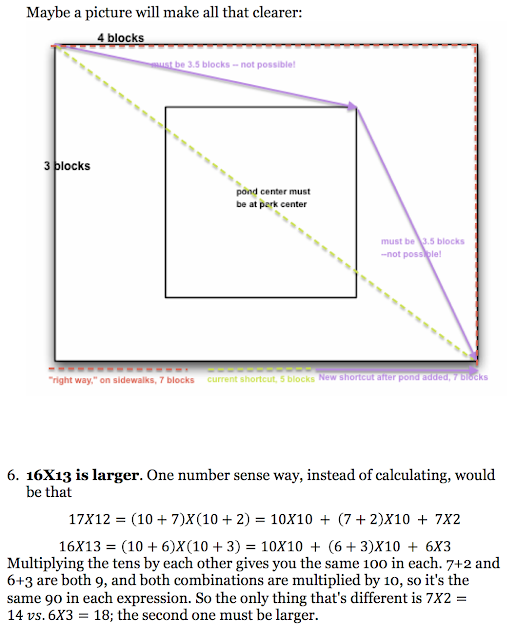 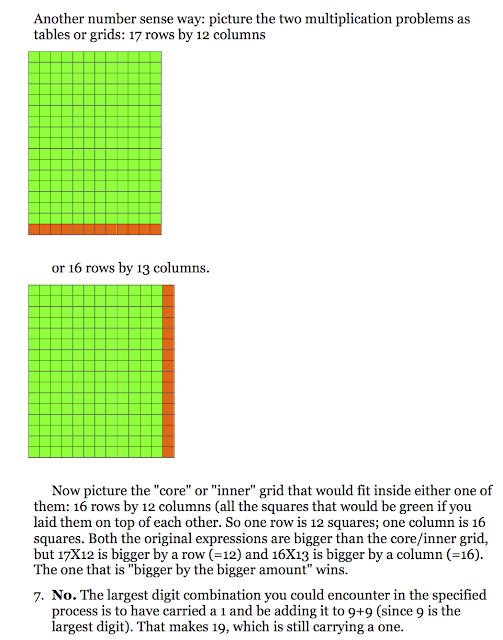 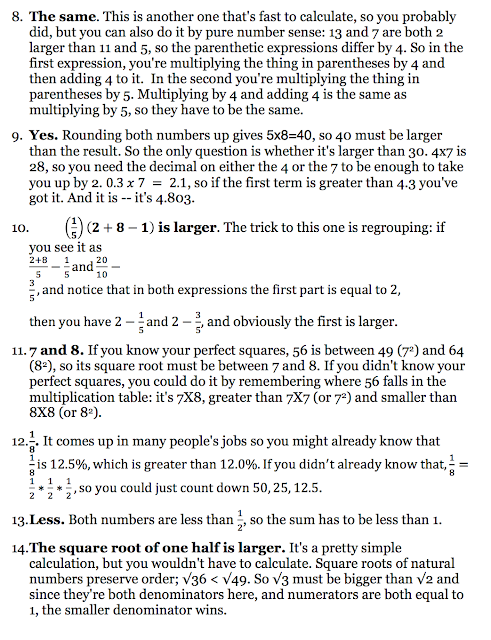 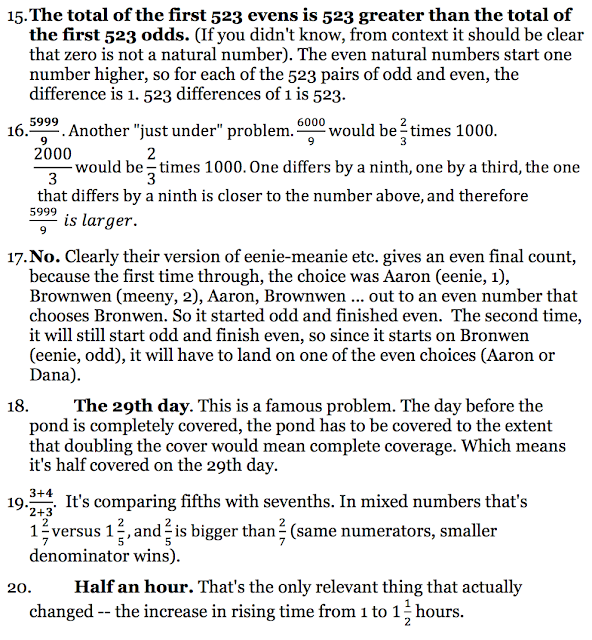 SCORING
You can count the answers right/wrong in any conventional way you like. The problems were taken mostly from the Grade 5 advanced standards with some additions from the Grade 6 regular, so if you got 14 or more right, you're about on par with what we expect of a brainy, well-trained 11 year old in Colorado.
For number sense, count the frequency of a, b, c, d, e, and f. (If you're ambitious you might even do a histogram).  If you have ten or more a's and b's combined, that looks like pretty good number sense to me; if most of your answers are c's and d's, you probably have fairly good number sense but learned math procedurally, so you may have to work on your own number sense to coach Singapore Math well. e's and f's mean you probably really need to work on your own number sense at the same time you are trying to help your kids. Be sure to admit you're trying to figure it out together -- seeing you struggle and catch on may very well be exactly the model the kid needs.