Jak is back, and on the track, and that's not whack

One benefit of being back in the saddle of a real teaching job (and an interesting one, too, these kids are fascinating in so many ways) is that I have many more ideas and more interesting ones than I did. One major drawback is that I no longer have time to write them down.

So, for the moment ... a bit of news: Open Road Media, the same people who brought Encounter with Tiber back out, are re-launching my old Jak Jinnaka series, beginning with The Duke of Uranium.

And because Open Road is a genuinely innovative place where they're actually doing a lot of the kind of things I talked about in "Author, Market Thyself" a couple years ago, and they have eagerly used my marketing research and share my basic philosophy about marketing books, I am quite certain that ....

Well, actually I'm quite certain that I know absolutely nothing about how it will turn out.

But I am also certain it's much more in line with what I wish book publishers had been doing all along.

Newsletter readers received a rather lengthy discourse about how I thought Jak Jinnaka was mismarketed (and how it happened to be) when he first appeared 11 years ago.  I guess if any of you who don't subscribe to the newsletter but want to read about book mismarketing at length were to drop me a note I'd shoot you a copy of that back issue.  But the super-short version is this: marketing of course directs readers to books they are likely to buy, but its more important function is to tell them how to read and like the book -- accurately.  Any time a reader is tricked into something they won't enjoy, it hurts all of us writers and readers; any time a reader is steered away from something they would like, or worse yet coached into reading it as something they won't like, that's an absolute disaster.  The marketing is as much a part of the work of art as the work itself (see my articles in the Oxford Encyclopedia of Theatre and Performance on Publicity, Playbills and Programs,  and on Posters for a somewhat technical discussion of all that).

So hurray for the new Jak. I don't know if you'll like him, or if anyone will, but this time he's being marketed, promoted, and sold as what I intended him to be: an amoral rascal perpetually surviving on single-minded selfishness, low cunning, and a hopefully-comic amount of dumb luck.  And The Duke of Uranium is his origin story, not the beginning of a YA franchise.

Here's the new cover, which I think says all that very well: 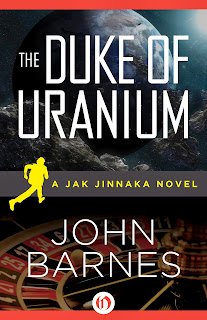 And by contrast, here's the old cover, which said "Heinlein YA pastiche about a likeable young man with potential" in the way that only Howdy Doody in a high school band uniform can. 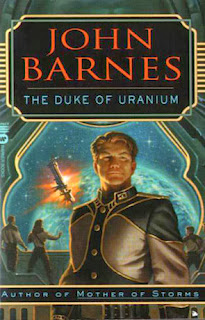